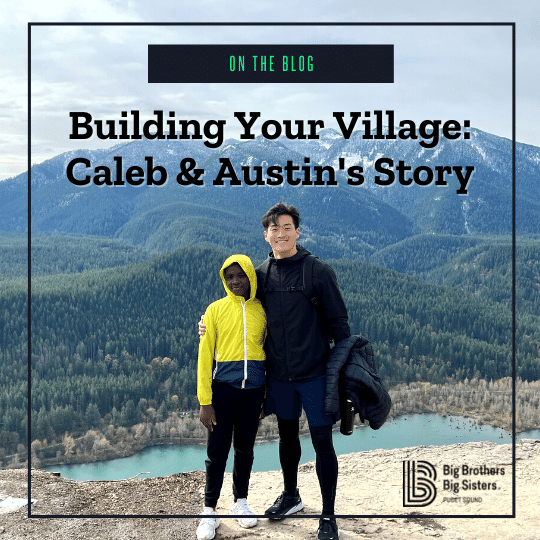 Posted by Jennifer Haberman in Blog / Match Stories on June 8, 2022

Think about the people who had a positive impact in your life.

Who do you think about? What did they do to shape you into the person you are today? How did they contribute to your success in life? Like most, you probably have a handful of people and a million small moments in your mind.

The mentors in your life, whether they were family, friends, coaches, or coworkers, helped you become your best self. They provided you with opportunities, experiences, and the safety needed to try new things.

Caroline knew that kind of network of support would be important for her sons Joshua and Caleb after immigrating from Kenya 5 years ago. Caroline’s older son, Joshua, was matched with a mentor through one of Big Brothers Big Sisters of Puget Sound’s school-based partnerships. After seeing the positive impacts mentorship had on Joshua, Caroline also wanted a mentor for her younger son, 11-year-old Caleb.

Austin and Caleb meet for the first time in spring of 2019. Over the next three years they would go from strangers to considering themselves part of each other’s family.

When Austin returned to the US in 2019 after his first Duty Station in Korea, he wanted to create a strong friendship with a young person in his new community. Being an active community member has always been important for the West Point graduate, and it was something he missed while overseas. After settling in at his new station at Joint Base Lewis McCord, Austin applied to become a Big.

Initially, Caroline wasn’t sure how much Austin, a Korean American, and Caleb, a relatively recent Kenyan immigrant, would have in common – but they connected right away. They share an upbeat personality and a desire to be active. And together they bonded over a shared immigration experience.

Adding that one extra person to your network can mean all the difference in life. As Caroline pointed out, in Kenya they have a saying, “it takes a village to raise a child”.

One of the most powerful things Bigs provide is a safe, trusting environment for kids to try new things. This helps kids gain confidence and develop their sense of self.

Especially when matches are just beginning, sharing new experiences helps youth and mentors get to know each other, building trust and understanding.

Caleb had recently joined the swim team when he was matched with Austin, but he wasn’t completely sure about sticking with it. He was shy and hesitant about it. Austin, an all-conference swimmer in college, saw this as an opportunity to bond early in their relationship. They soon started swimming at the local YMCA.

Austin was able to give Caleb some good competitive swimming tips, used his experience to support Caleb’s swim team coaches, and found a new appreciation for the life lessons swimming gave him.

Now, Caleb isn’t so shy about swimming. He tells everyone his goal is to go to UCLA on a swimming scholarship.

Caroline reminds Austin that just spending time with Caleb – being there for him all of the experiences they have together – is what she sees as having the biggest impact.

When they are together, Caleb is receptive to doing things outside of his comfort zone, and always comes back with a smile on his face.

Caleb and Austin rarely miss an opportunity to try something new or give back; from selling programs at the Seahawks Game, going to the Symphony to painting their own ceramics. After all, you never know what is going to be the spark that sets you down a path in life.

Caleb and Austin do sometimes talk about what they want to be when they grow up. Caleb talks about being a scientist, and Austin is working towards a career change with an eye toward sports management. These fields are non-traditional for both of their families, and while change and newness can be scary, they are chasing their dreams and encouraging one another along the way.

Donated tickets to events like football games, museums, or the symphony (pictured here) allow matches to bond over shared experiences and try new things they otherwise might skip.

Caleb and Austin’s match will shape the rest of their lives in big and small ways.

In a couple of months, Austin and Caleb’s 3+ year old match will officially “close.” That’s because Austin is exiting the Army to start an MBA program in Philadelphia. Because of supporters like you, Austin and Caleb will always be in each other’s lives…and Caroline says she’ll always be Austin’s PNW mom.

Right now, there are thousands of young people like Caleb who want an Austin in their life, and thousands of Austins who want to be transformed by becoming a mentor.

“I spend so much time focusing on where I want to go with my career, and it’s easy to get absorbed in your own world. Being a Big helps me stay grounded. At the end of the day, it doesn’t matter what position I have or what position he has – it’s going to be the little moments and daily interactions that will have the biggest impact.”

You can make the difference, today!